While reviewing your options for air conditioning, you might have heard about something called a ductless mini-split AC. While this type of unit shares many features with a traditional central air system, it differs in several crucial ways. This is important to know if you’re planning a new AC installation. A ductless setup may fit the bill for some homeowners. However, a centralized setup may work better for others. Let’s take a closer look at the pros and cons of each.

At their core, all conventional air conditioners work in the same way. Namely, they create “cold” air by pulling heat out of hot or warm air. Things begin inside the evaporator, a component that uses refrigerant to trap any unwanted indoor warmth. This heated refrigerant then travels outside to two other parts: the compressor and the condenser. The compressor pressurizes the refrigerant and makes it even hotter. The condenser then concentrates it and transforms it from a gas into a liquid. With the help of an attached fan, this condensing process releases the heat to the surrounding environment. The cooled, liquid refrigerant then returns to the evaporator.

In a central AC, a device called an air handler gathers the conditioned air near the evaporator. When the system activates, an attached blower sends that air through a network of ducts. All rooms tied into the ductwork will receive their portion of the cooler air. Depending on your setup, a single thermostat determines the target temperature for the entire house or just one floor.

Ductless mini-split air conditioners rely on the same underlying technology as central ACs. However, they utilize that technology differently. First, as their name implies, they are not tied into a system of ducts. Instead, they connect directly to their own, non-ducted components. The evaporator and air handler sit in a unit attached to the wall or mounted in the ceiling. The compressor/condenser part of the system lies outside. Some mini-splits, called single-zone units, utilize completely separate components for each room. However, other setups feature multi-zone units, which use a single compressor/condenser for multiple rooms.

There are pros and cons to both central air and ductless air conditioners. When it comes to choosing central air, one of the main things to consider is the ductwork. If you already have a functional ducting setup, installation of a new central AC can help you stay within budget. On the other hand, ductwork will cost a pretty penny to install from scratch.

Aesthetics also play an important part in most homeowners’ AC-related decisions. Some people don’t mind seeing the visible cabinet of a mini-split air conditioner every day. However, others much prefer the relative invisibility of a centralized system.

If your current or future home is not equipped with ductwork, a ductless mini-split setup can mean big installation savings. The lack of ductwork also usually makes your AC system more efficient. There are a couple of reasons for this. First, most ducts will develop flaws over time and lose some of their air-tightness. In turn, this loss of sealing translates into a loss of cooled air and increased cooling expenses. The zoning capabilities of ductless systems also tend to contribute to lower utility costs. That’s true because they allow you to set temperature levels room by room. You can also completely shut down the cooling in vacant or seldom-used rooms.

A couple of other factors may sway you toward a modern ductless setup. Compared to a centralized system, the lack of ducting typically results in lower levels of indoor air pollution. This can be especially important for people who suffer from allergies or asthma. Your relative sensitivity to noise may also contribute to your decision. Mini-splits generally produce less of a racket than their central-air counterparts.

As you can see, despite their shared operating principles, mini-splits and central air systems differ in significant ways. Many homeowners prefer to stick with central AC, even when moving into a brand-new building. However, others have joined the many consumers nationwide now switching over to state-of-the-art ductless systems.

If you need help deciding which option works best for you, contact your local AC professionals. These experts can answer any questions you may have about your numerous cooling options. Also, they’ll have the skills needed to install your chosen product in a new or renovated home. In the end, you’ll be able to enjoy reliable indoor comfort for years to come.

Different Plunger Types , How They Work & What They’re For

Is Your Wall or Window AC Leaking Water Inside? How to Fix it

Which Heating/AC System Should I Install?

We at Orange Coast Plumbing, Heating & Air Conditioning can work around your busy schedule. 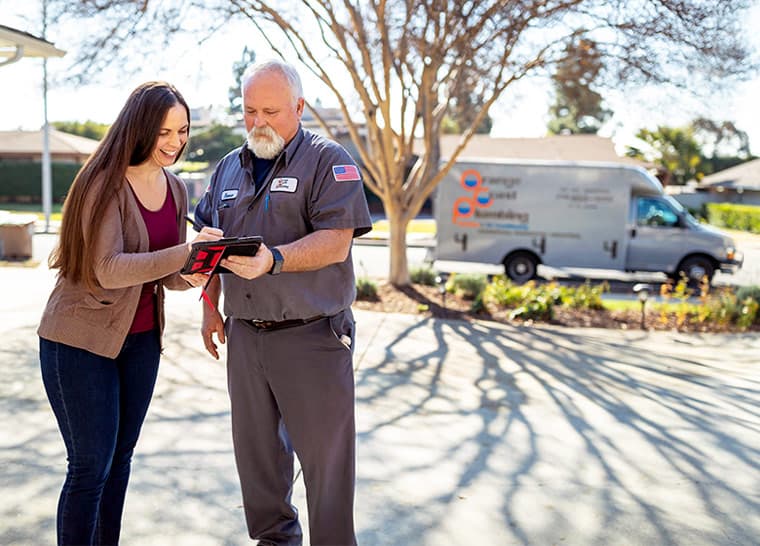 Get $25 off when you schedule your service by phone or online.